Brexit - The Legal Implications on Commerce

Is it a bit too late to write about Brexit?

Economic instability, privacy concerns, dispute resolution framework, currency fluctuation and immigration issues – we have heard about each of these predicaments due to the political shift of one of the oldest economies from one of the most stable confederations. In this article, our lawyers in Sharjah will explain the impact on commercial transactions due to the United Kingdom’s severance from the European Union (EU) when Theresa May triggered the Article 50 of the Treaty of Lisbon on March 29, 2017. The Article 50 of the Lisbon treaty states that: -

So, the two-year countdown to Britain’s official departure from the EU is already in action. No later than April 2019, Britain should leave the EU, and whenever negotiation talks are coming forward from Lanchester house, it touches the nerve of many stakeholders. Why? It is because your commercial transaction regarding your contractual rights, obligations, performance will be immensely affected by the negotiation between Brussels and Lanchester officials. But what is going on in this consultation? It is a re-defining process of EU’s core principles- free movement of goods, capital, services, and labor – the four freedoms comprising the internal market of European Union. The definition of the domestic market of European Union is in Article 26(3) of the preceding Treaty regarding the Functioning of the European Union (the TFEU).

The internal market should involve a territory without inward wildernesses in which the free development of merchandise, people, administrations, and the arrangement of the treaties will guarantee the capital.

It is essential to go over each principle and understand the changes in those four laws following the Brexit. It will allow us to have a big and detailed picture of Brexit’s impact on the commercial transaction. Then we will provide you the solutions for your business, to protect your contractual rights, obligations, and performance.

The Article 110 of TFEU means that member states have cleared away custom barriers amongst themselves and preceded with a common customs policy towards other countries. After Brexit, UK companies wishing to trade with EU/EEA member states will face the customs duty that they have not paid over 40 years since the joining of EEC in 1973. The customs duties that UK face, of course, are likely to be higher and this will weaken the competitiveness of UK products within European internal market.  Furthermore, customs check of UK products is under an obligation for entering and leaving the EU. It could burden UK business entities with additional costs and delays. Most importantly, UK companies will have to comply with EU regulations over which they have no control in negotiation.

On the other hand, it is pertinent to note the sterling exchange rates in commercial transactions after Brexit. It will significantly affect the way import and export transactions works. A fall in the value of Sterling is excellent news for offshore businesses making imports from the UK, but not for foreign companies exporting to the UK. For international firms taking up investment in the UK, the fall in the value of Sterling may produce significant business opportunities to acquire UK firms cheaply. 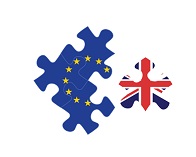 Tariffs apply to goods as well as services provided to and from the EU following Brexit. It could increase the cost of the service supplied by UK companies and weaken the price competitiveness of UK service providers. Meanwhile, the number of service firms present in the UK could reduce due to Brexit. Presently, thirty-seven (37) percent of financial services companies said they are likely to relocate their office if the UK left the EU. Potentially it can affect the entire service industry in the UK as many large international companies based in the UK are purposely to serve the EU as a whole market benefiting the process of single European regulatory standards. This benefit no longer exists after Brexit and will likely to reduce the entire volume of commercial services provided in the UK.

The most significant impact could be observed in Mergers and Acquisition industry in the UK after Brexit. Currently, merger and acquisition transactions to which EU Merger Regulation is in the notification are not under an obligation to make a filing to the UK authorities. After Brexit, the information of the operations under EUMR will be sufficient; it would be a mandate to report such transactions to the UK Competition and Markets Authority (CMA) as well. This duplication of notification requirements will increase the already significant volume of works for companies wishing to engage in mergers or acquisitions. They will have to make parallel and the duplicate filings in Brussels and London. The burden of duplicate merger notifications will be particularly significant in transactions such as the agricultural sector, such as Bayer and Monsanto, ChemChina and Syngenta, and Dow and DuPont. All these companies are engaged in multiple markets and have complex vertical and joint venture relationships.

Free Movement of Labor and Capital

Curtailment of the freedom of employees or on their action could lead to labor shortages. It could also drive up the costs of energy in the UK. It may affect businesses in specific sectors in the UK, such as construction and care that are heavily dependent on workers from the rest of the EU. Furthermore, UK capital market may suffer from the reduced investment after BREXIT. The UK has been attractive to direct foreign investment thanks to easy access to a vast European market. It is debatable, but almost 1/3 of foreign investment came from overseas banks and other financial services institutions to benefit the single regulatory service of the European system. Without EU market, UK capital market will no longer be so much attractive.

Commercial transaction and its obligation after BREXIT

As discussed above, the business can identify the impact of Brexit in the four areas- goods, service, capital and labor which lay down the foundation of the industrial transaction. Most importantly, the business effect of Brexit could freeze the performance and make your contract becoming more and more difficult to perform. Nonetheless, it is improbable that the English court will grant consequential damage to the parties as the consequences of Brexit.

Some may argue Brexit makes performance impossible and consider invoking force majeure clause. Force Majeure is used to describe events possibly affecting the contract that is entirely outside the parties’ control. However, the counter-argument will be that the following consequences from Brexit were reasonably foreseeable considering that the two-year negotiation talk provided parties enough time to adjust their contractual rights or performance and equip express provisions.

In any case, under English law, the damages granted from force majeure is very much limited and is not positively applied. It has to be pointed out regarding the contract. Therefore, the best way to protect contractual obligations against Brexit is to furnish express provisions to accommodate for these changes. For instance, an express provision that protects right to not terminate upon Brexit or vice versa. Furthermore, parties could agree on an express provision that secures the movements of exchange rates following Brexit. In this way, your commercial transaction will survive in the stormy weather of Brexit.